We replaced a bare light in our mud-room with this fixture, which we purchased from Expo in Concord, California (unfortunately Expo closed its doors over a year ago). 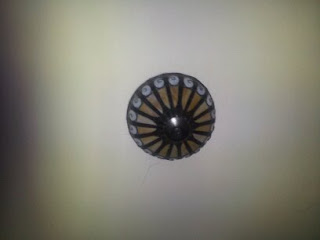 Email ThisBlogThis!Share to TwitterShare to FacebookShare to Pinterest
Labels: Lighting

We shopped around for a new coffee table for many weeks.  But we didn't get one.  Instead, we got something a little different.  It is sort of a cross between a coffee table and an ottoman: 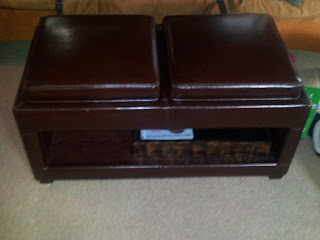 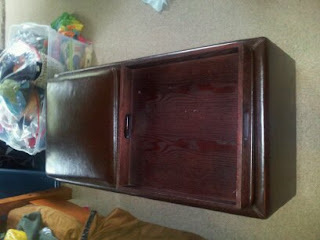 The table has two sides and a big space underneath to put things like coffee table books.  Each side includes an ottoman-like structure that you can flip over to become a tray for food.

We got this at Fenton MacLaren on College Avenue in Rockridge.  Lots of great stuff there.
Posted by Ms. W. at 7:15 AM No comments:

Email ThisBlogThis!Share to TwitterShare to FacebookShare to Pinterest
Labels: tables

Many years ago, I bought a wooden coffee table.  The table included two small drawers for papers, etc.  It was one of my first pieces of what I thought of as "grown up" furniture, and I loved it.
Over time, the drawers got stuck.  This might have been due to the summer heat or winter dampness swelling the wood.  At any rate, the drawers would get stuck.  I'd pull at them to reopen them.  Ultimately, this caused the handles to break off -- they were just that stuck.
I had trouble parting with the coffee table.  After moving out of my apartment and into our new old bungalow, it gradually became clear that the coffee table just didn't fit the room it was in.  We'd move it from room to room, and it would either be too big, too small, or not fit with the character of the room.
The question became -- what should we replace it with?
The coffee table now sadly sits in our garage.  In our next post -- replacing a coffee table with something that is not a coffee table.
Posted by Ms. W. at 7:00 AM No comments:

So what grill did we decide to get? 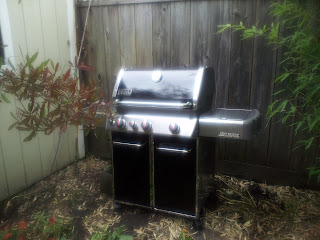 It is a pretty big grill for a mid-size grill, as you can see: 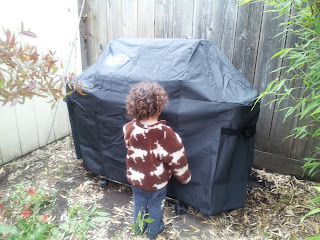 I saved the best for last -- 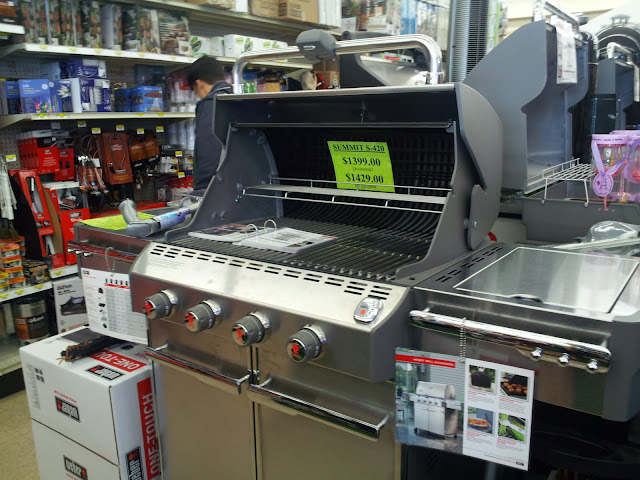 This is the Weber Summit S-420.  It is still considered a mid-size grill.  But it is pretty darn big.

Near as I could tell, the one big difference between the 420 and the 330 was the extra burner and the larger cooking surface.  Also the door handles and places for hanging BBQ tools.

We continued the BBQ search online at sears.com and at amazon.com.  Not quite sure what's going on with Amazon; the prices seemed much higher there than in stores.  I ultimately gave up on Sears.com because of the time it would take to get the grill delivered, and also because it was a bit challenging to use their interface to find the right grill.

Bingo!  This was the place.  They had every mid-size Weber gas grill.  And I was finally able to compare them side-by-side!  The Weber website ought to allow you to do that, but it doesn't.  Even the order in which the various features of each grill are listed for each grill in a different order, making it tough to do a comparison.
So here they are!
First up - the Weber Genesis EP-330.   Weber advertises these with cast iron or stainless steel grills; Ace only had the stainless steel for most of its models.  The stainless steel seems to be the most popular (and are also more expensive).  My preference would've been cast iron, but I figure I can order a cast iron replacement if it really seems to make a difference.
The 330 has a special searing burner in between the left and middle burners in the grill.  It also has a burner off to the right side of the grill, which is great for boiling water, keeping marinade warm, or whatever else you might need. 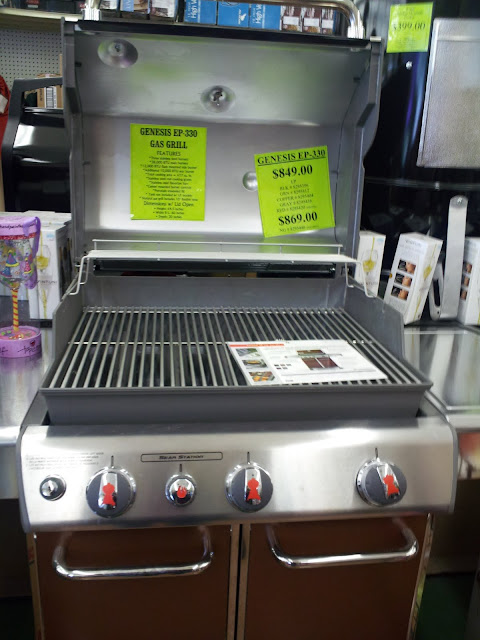 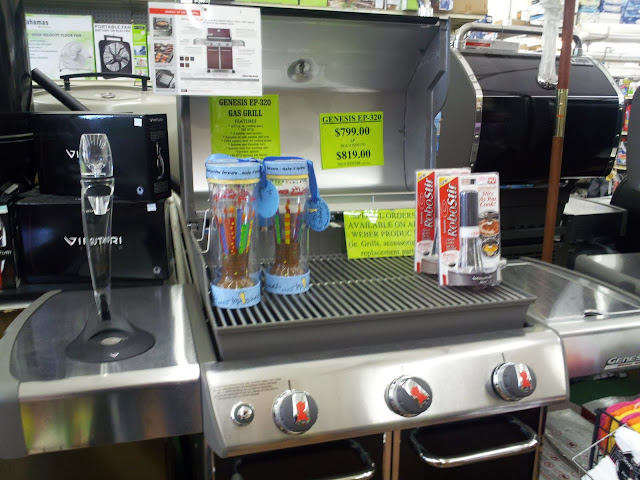 Next is the Weber Genesis EP-310.  As the next model down from the 320, this one lacks the burner off to the right side. 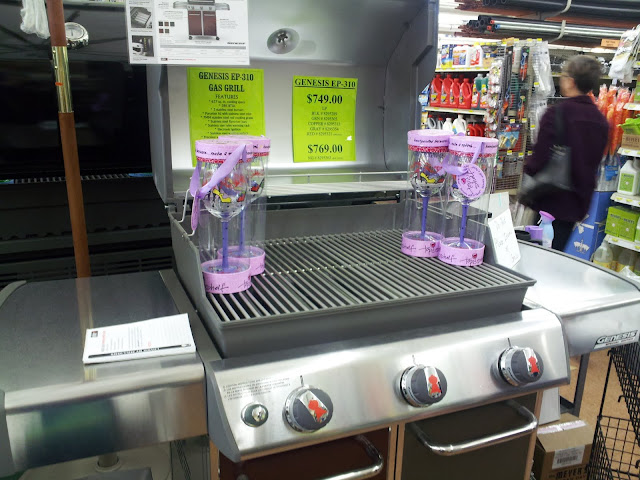 The next Weber model down the list on display at Ace is the Weber Spirit E-210.  This has two burners.  They had a cast iron grill surface for this one. 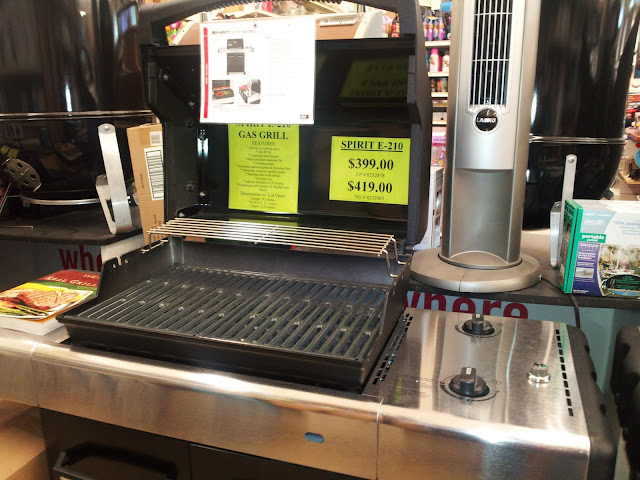 One note about the prices that you can see in the pictures here.  The top price was for the grill with liquid propane ("LP").  The propane tanks run an additional $49 or so.  The lower price was for a natural gas grill.  We don't have a natural gas line hookup in the backyard, and I wasn't about to build one out, so we went with an LP grill.
Posted by Ms. W. at 8:00 AM No comments:

We spent a fair amount of time in May and June hunting for a great BBQ, with the goal of getting it by Father's Day.  It was quite an adventure.

Everyone seems to have advice about BBQs.  We started using this as a test when interviewing potential kitchen designers -- one guy said we should definitely go with a Wolf BBQ, which made us think that this was one indication of why his bid for the kitchen was so dang high.

The general consensus seems to be that a gas BBQ is the way to go.  My original preference was for a regular old Weber charcoal grill.  But while I loved my old Weber and its smells, it would smoke my wife and son out.

We went to many stores in search of the particular gas BBQ.  Our nearby Sears (that link takes you straight to the BBQs) has a decent selection of Kenmore grills, but didn't have many Weber grills in stock.  If they did, they'd also have free delivery.  But, they don't, so you end up having to order online.

We checked out a BBQ place in Walnut Creek called Barbequeues Galore.  We figured this place had lots of potential.  They offer a lot of high-end grills, most with brand names that I just don't recognize.  They seem to try to sell BBQ systems that you might install in a large backyard -- the kind with an enormous 6-burner grill with a granite countertop that costs over $15k.  These guys didn't know anything about the Weber grills -- even the one that they had (which was a Weber 310 with the price seemingly marked up above the standard retail price quoted on the internet by other vendors selling Webers, rather than the 330 we wanted).  Lots of people seemed to come in when we were there to ask about that sort of grill, and the sales folks would be pretty short with all of them.  This is NOT the place to go to get a grill for normal use.  Stick with ACE, Sears, Home Depot, OSH, etc, etc.  The pretentious grill thing does NOT work for most folks (including me).  It sounds way better than it is.

Here's the one and only Weber on display -- it was the 3-burner E310.  Price was a bit higher than quotes you'd see for this grill on the Internet (as I recall, their price may have been closer to what you'd pay for the next-step-up Weber). 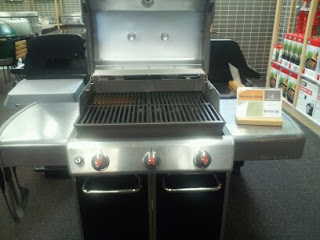 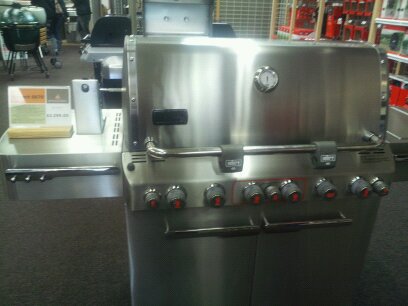 I never really thought too much about ceilings before seeing the ceiling in the front room of our house for the first time.  The beams form a simple criss-crossing patchwork that I found immediately appealing: 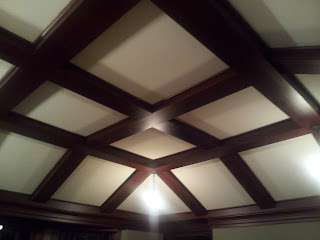 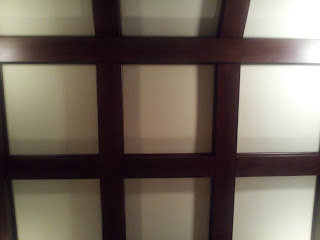 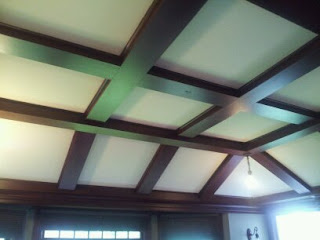 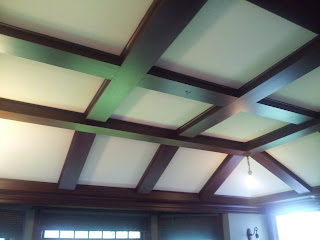 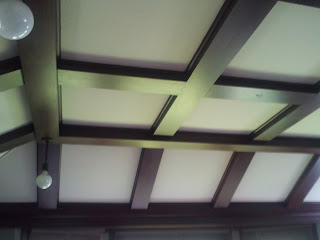 Another craftsman-style touch that helped us fall in love with the house, despite the work that would have to be done (some of which remains to be done).
Posted by Ms. W. at 9:35 AM No comments:

We purchased our paint supplies for painting our son's bedroom, and for doing the wood restoration in our mud room, from Ecohome Improvement.  They are located in Oakland on San Pablo Avenue.  Ecohome sells only environmentally friendly paints, carpet, etc.

I recommend this place, with two caveats:

1 - They are closed on Sundays.  I'm sad to say that I forgot this fact on several occasions.  That is a problem for an amateur home-improvement guy like me, who really only gets to do work on the weekends.  If you're in the middle of a task and need more paint on Sunday, you are just out of luck.

2 - They are more expensive than other paint stores.  This is part of the "eco" thing.  That said, this is an important value for us, and so paying a bit extra seems worth it.  That's even more true with a little person running around the house.
Posted by Ms. W. at 9:30 AM No comments:

Email ThisBlogThis!Share to TwitterShare to FacebookShare to Pinterest
Labels: paint

The final product of the effort restoring the wood in our mudroom was that we uncovered the original redwood under all the crummy paint that had been added over the years.  We then stained the wood to bring out more color.

We highly recommend Kushi, the painter who did this work (and painted our son's room) -- Arkenstone Painting in Oakland.

Here's the end result as it looks today: 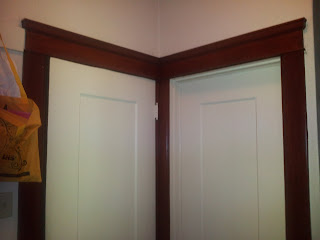 The bedroom door has a little monkey hangar on it: 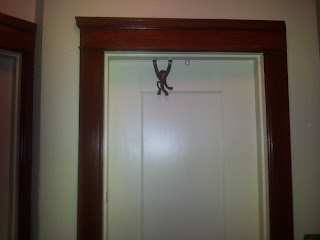 Here are two attempts to show the wood close up (with and without the flash).  We used a cherry stain: 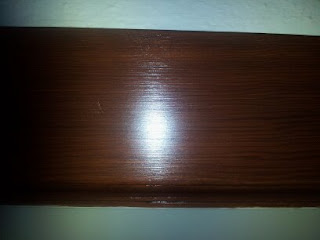 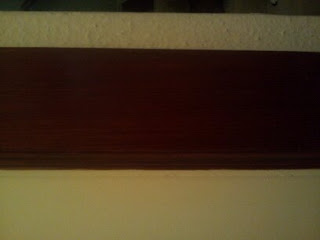