Our old bungalow dates back to before refrigeration.  Refrigeration existed in 1916, but was mainly for commercial use (and was ammonia based).  It wasn't common in home use until much later (after the development of Freon, which didn't come along until the late '20s).

Our bungalow likely relied on a cooling cabinet to keep food (somewhat) fresh.  In this picture, you can see a set of slats next to our present-day kitchen windows: 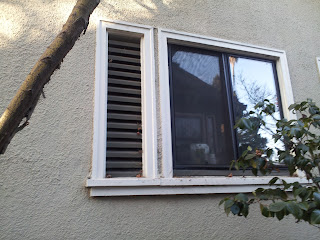 Originally, those slats opened into a cabinet in the kitchen.  The slats would allow cool air from outside to circulate into the cooling cabinet.  Pretty high tech for 1916.