The Fox Theater is having its "A Taste of the Fox" event tonight at 6:00PM, April 30th.  It is at the Fox Theater on Telegraph avenue in Oakland.  The event is a benefit for the "Friends of the Oakland Fox Theater," and features Livermore Valley wineries and food from restaurants in uptown Oakland.  The event will be located in the Mezzanine inside the historic Fox Theater.  This will be the first event to be held  in the Mezzanine since the theater reopened.
.
Historical Perspective (including from the Fox site):

The Fox first opened its doors in October 1928.  At the time, the San Francisco Chronicle even called it, "different, novel, and mystic."

For more than three decades, the Fox theater was a first-run movie house, and the area around it was a bustling entertainment and movie district.

The Fox Theater closed its doors in 1966.  The downtown lost its theaters, its department stores, and (some would say) its vitality.

The Fox survived an arson fire in 1973, and its increasing shabby condition let it to be derided as "the largest outdoor urinal in the world."  The theater avoided an attempt to destroy it to create a parking lot in 1975, and was finally named a city landmark in 1978.  Here's a photo circa 2002 (from Wikipedia): 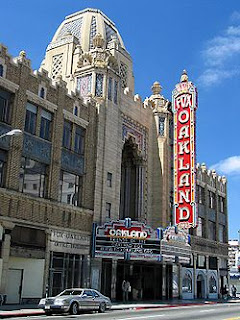 In 1996, the Oakland native Phil Tagami, whose parents had their first date at the Fox theater, first approached the city officials about restoring the theater, but as he said, "I felt laughed at."  Tagami, 42, was a high school drop out who cut his teeth working as a laborer in the construction business before starting to buy and fix up old buildings, mostly in Oakland, California.

Here's a great photo (taken by "vision63" and reposted under creative commons): 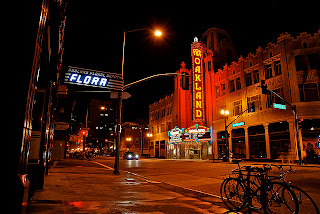 Finally, after 40 silent years, the Fox Theater is open again.  I began thinking more about the return of the Fox Theater when my nephew, who was visiting from out of state, recently went to a show there.  He told me it was packed!    My husband gave him advice on taking BART there from San Francisco, and we were both proud of this Oakland landmark being reborn!  You can never underestimate the power of a woman to reinvent herself, even if she is a building!

The first Friday of the month is so much fun in downtown Oakland now.  The restaurants, bars, and galleries are open, and we once again have a burgeoning arts district.


I wanted to draft a special post for my wife, Bungalow Mama.

Being married to me is not easy.  I suppose marriage never is, but I am a particularly tough case.  I can be stubborn.  I can be somewhat dense.  I can easily get lost in my work.  I can be oblivious.

Bungalow Mama, on the other hand, is one of the most empathic people I know.  I like to think that I am empathic.  But she really is.  She thinks about others all the time.  Including me.  She is an amazing mother to our four-year-old, always seeking to give him new experiences and teach him new things.  She tolerates my silliness.  She stays positive.  And she loves life.

"Heart of the Home" Tour in Piedmont

There is a 24th annual "Heart of the Home" tour in Piedmont, CA today from 10:00AM to 4:00PM.  Though the tour started yesterday, there are still tickets available for the tour today, and you can pick them up at the Piedmont Community Center.  See the website, www.wehelpkids.org for more information.

I heard about this B & B from a friend and wanted to share the place, especially since this weekend is the last weekend for Heavenly ski area (their last day of winter operations is April 29th, though my understanding is that the B&B is open year-round).

Their website includes the quote,  "A guest the first time, A friend for a lifetime."  Looking forward to checking them out ourselves soon.

Many of the rooms have a river rock fireplace so you can extend the enjoyment of hanging out by a toasty fire. For those interested, there is also a tree trunk fireplace in the lobby/lounge area.

In Berkeley, CA the restaurant FREEHOUSE has only been around for three months.  It took over the space once used by Adagio, which was good but had become a bit boring.  FreeHouse is already becoming a favorite hangout.


The architecture is gorgeous; the space has wood wainscotting, boxed ceilings, a huge fireplace surrounded by leather couches, and a long comfortable bar.  They have a full sized bar and pool table. 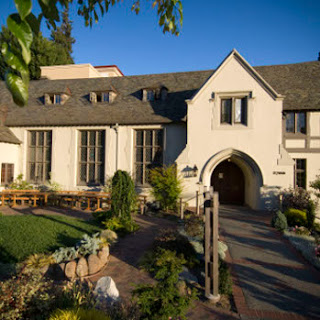 
Perhaps most importantly, they have yummy food.  The chef used to be at Monks Kettle Restaurant in San Francisco.  The menu included burgers with grass-fed beef, beer poached mussels, and buttermilk fried wings.


From Rockridge BART, you can take the 51B AC Transit bus to get to the restaurant (which is right across from the Berkeley campus).  The address is 2700 Bancroft Way in Berkeley, CA.


FREEHOUSE shirts are available for sale for only $5.00.

Email ThisBlogThis!Share to TwitterShare to FacebookShare to Pinterest
Labels: restaurants

There a big sale at Lamps Plus that ends on Sunday.  We got our outdoor backyard light there and I love it!  It has a unique arts and crafts look and doesn't look like it is from a chain like Lamps Plus. 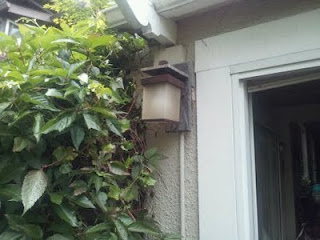 I got our lamp at the store on 550 Contra Costa Blvd, in Pleasant Hill, CA.   The number is  (925) 687-6723. They have a fairly good section of outdoor craftsman/bungalow style lights.  I am not as impressed with their selection of indoor lights.  I went there recently looking for a new dining room light and couldn't find anything.
Please e-mail us at teachingcurve@gmail.com if you have any other light suppliers that you would recommend.
--Bungalow Mama
Posted by Ms. W. at 9:35 PM No comments:

Email ThisBlogThis!Share to TwitterShare to FacebookShare to Pinterest
Labels: Lighting

Apologies for not posting recently; I've been tied up with jury duty for a few weeks. The case ended last week (guilty); I hope to begin posting against soon!
Posted by Ms. W. at 5:37 PM No comments: