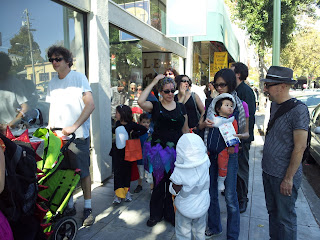 No need for fake cobwebs here.  I haven't had the heart to remove the spider web near the front of our own bungalow -- at least not before October 31st... 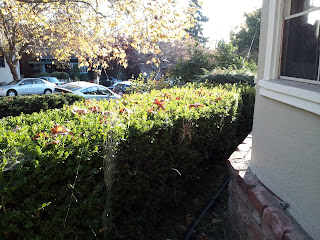 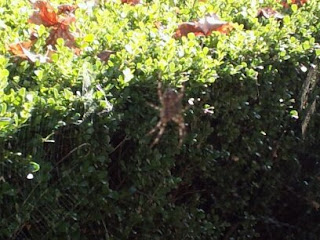 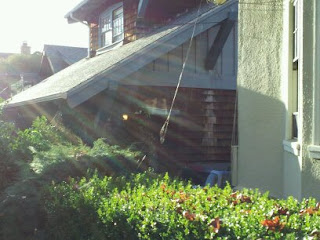 A lot of the bungalow-dwellers in the Rockridge neighborhood of Oakland really get into the Halloween spirit.  Here are a few examples.

Note the ghosts and living dead behind the cobwebs. 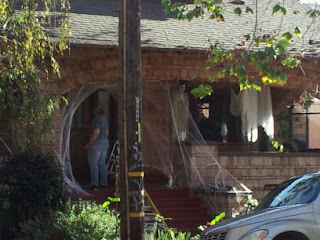 A most excellent carving: 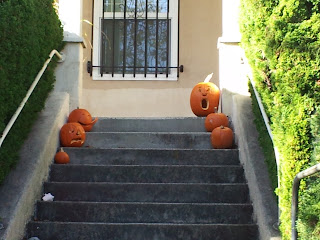 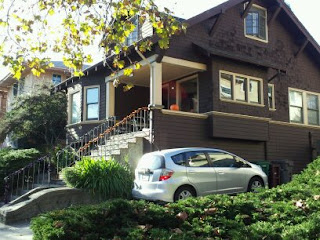 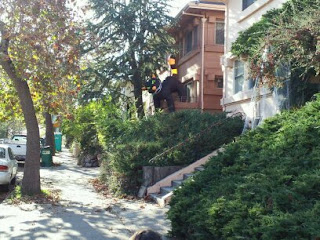 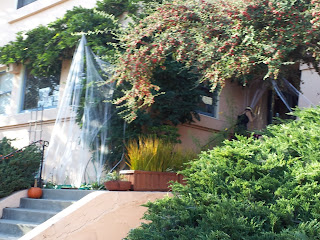 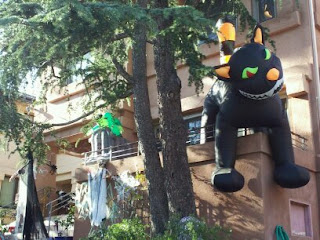 Living at the same home as the massive cat are some ghosts and living dead: 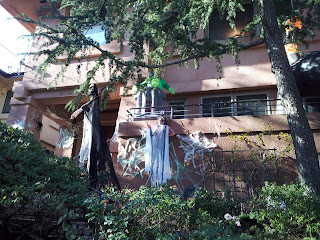 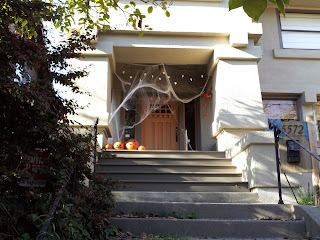 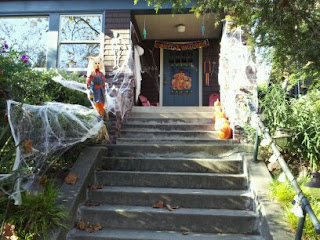 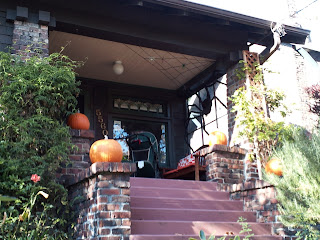 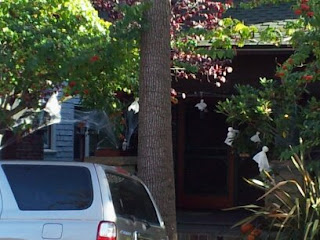 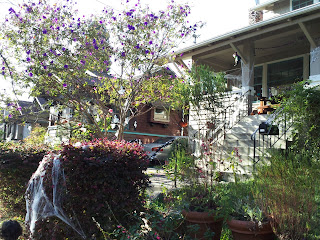 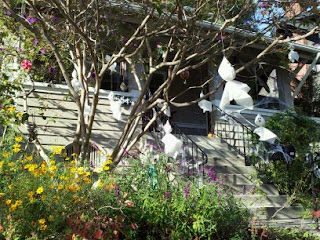 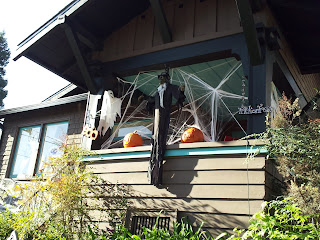 Happy Halloween to all the old bungalow-dwellers out there!

One helpful tip for today:  Please note that your jack-o-lanterns are going to start decaying after only about 2-3 days.  Prepare accordingly.  My decision to get an early jump on my carving this year did not end too well...
Posted by Ms. W. at 8:04 PM No comments:

When you're doing work on an old house, and you want something done right, sometimes the best thing to do is not try to do it yourself.  So you seek out a professional.

But sometimes the professionals really aren't.

I think maybe there's a screenplay in this.  For now, I think I'll just start with a few blog posts with some of the better stories.  Coming next week:  The Crummy Contractors #1.  Sort of like Superman Comics #1.  Except without the cartooning and plot.
Posted by Ms. W. at 5:30 AM No comments:

Email ThisBlogThis!Share to TwitterShare to FacebookShare to Pinterest
Labels: contractors

I was mostly preoccupied with our driveway.  Meanwhile, the contractors were making progress on laying the new sidewalk: 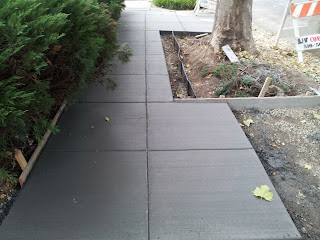 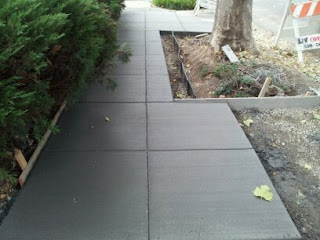 What I didn't realize at the time was how much of the sidewalk ended up being built right under the hedge in front of our house.  You can see the hedge on the left side of these pictures.  I suppose it made sense for the contractor not to build the sidewalk as close to the tree as it had been before, since the roots would crack the sidewalk more quickly that way.  But it remains a bit of a problem to this day.  I'm probably going to have to buy a hedge trimmer or saw to hack off a large chunk of the hedge in order for people to walk by.
Posted by Ms. W. at 5:49 AM No comments:

Fortunately, the contractor didn't just leave it to me to hack off the curbline so that it would slope.  A large hammer and chisel was helpful.  But it would never have been enough.  What we really needed was one of these massive saws: 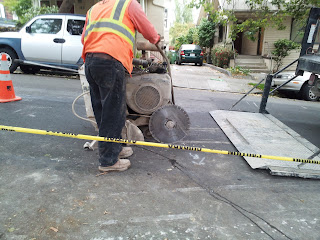 Progress on our sidewalk was a lot faster than it has taken me to write about it!

Our biggest concern during this process was that the corners of the driveway be curved properly so that we would no longer end up running into the corner with our car.  The driveway is tight, and the fact that the curb had been pushed upward by the massive tree roots growing underneath was the biggest part of the problem.  But we didn't want to replace that problem with an abrupt and high curbline that makes it impossible to turn into the driveway.
We ended up talking with the contractor's workers about this pretty much daily.  In the end, I used a massive sledgehammer that I borrowed in order to hack off and curve part of the sidewalk where we wanted the new driveway to slope.  Swinging that thing sent major shock-waves up my arms; I could feel it for days afterward.  I also had to hack off about 6 inches from the curb on both sides of the driveway: 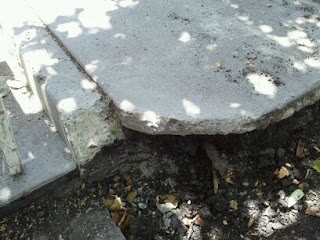 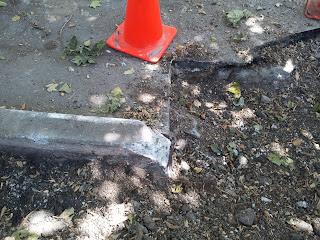 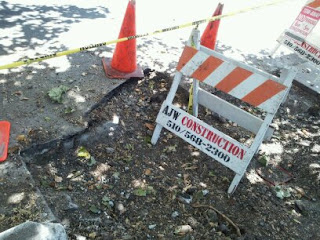 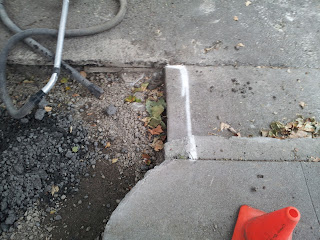 Email ThisBlogThis!Share to TwitterShare to FacebookShare to Pinterest
Labels: sidewalk

I was reading the other day about a school in Wisconsin that helps you make your very own rustic arts and crafts furniture from forest materials.    Maybe I'm an arts and crafts fanatic, but how fun it would be to make your very own ladderback twig chair!  Plus, according to the teacher, 90% of the students are women, and no woodworking experience is needed.  The classes are for anyone sixteen and over.   Every Friday (except holidays) they offer a furniture making class.  This sounds so much fun, I'm ready to pack my bags and book a flight, just in time for the beauty of the fall leaves.  They also offer other classes in cross-country skiing, mountain biking, and wilderness survival.

Arts and crafts furniture can also be purchased at Lottos Log Cabin.  There is also a lakeside vacation rental on the same property if you want to take classes but live in another state.  The area sounds gorgeous, especially since I love fall in the midwest.  The house and cabin are next to acres of public woodland.   The contact information: 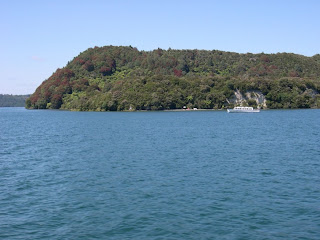 Email ThisBlogThis!Share to TwitterShare to FacebookShare to Pinterest
Labels: arts and crafts, classes

BBQ Chicken Wings and Corn on the Grill

I've been wanting to share some of our favorite recipes for some time.  Tonight, after a day doing the Rockridge kitchen tour, we BBQ'd chicken wings and corn on the cob.

First of all, this morning, I marinated the chicken wings for two hours with the following marinade:

one 6 oz. of pineapple juice (you could also use lemon juice, but it is more citrusy)
1/4 cup of olive or canola oil
3 tbs. of agave nectar
1/4 cup of organic tamari or soy sauce
1/2 tsp. of garlic powder or fresh minced garlic
1/4 tsp. black pepper

To save time, we sometimes use OrganicVille brand marinades (but we made our own today).

Then, when we got home from the tour we grilled the wings.  We got 18 wings from Marin Sun Farms, which has a butcher shop at Market Hall in Oakland (also at the Ferry Building in San Francisco).  Excellent meats (and we had toured the farm itself, which is up in Point Reyes, which was very educational; we'll blog on that another time).

We preheat the grill.  Then my husband dunks the chicken one last time in the marinade and puts it on with the dials set to medium.  He fit all 18 wings onto the grill.  Every 3 minutes or so he flips the wings.  After the first flip, he bastes each wing with fresh marinade (don't want to re-use the marinade that the raw chicken sat in for 2 hours, right?).  Total cooking time is around 22 minutes (we like our wings crispy but not burnt).  About 1/2 way through the 22 minutes we turn the grill down to just slightly lower than medium.

Corn on the cob -- It takes 15 minute to cook the corn on the grill.  Some recipes suggest basting the corn with butter before cooking, but we didn't and it was delicious!  That saves calories for dessert!  The advantage of grilling the corn is that it adds a smoky flavor to the corn.  We grill the corn with the husk on which prevents it from drying out.  The following are the directions we use to prepare the corn:

2)  To prepare corn, grasp husks and pull back.  Pull off all the silk and then replace the husk to cover the corn.  Do NOT just throw it in the sink; you will regret it later if you don't have a garbage disposal.

3)  Place corn on hot grill, close the lid, and grill it for 15 minutes (longer if you keep opening up the lid to turn the chicken wings...)

One other fun thing to wrap up a BBQ -- roasting marshmallows over a backyard camp fire.  We use Java logs, which are better for the environment and aren't as bad for folks with allergies as burning Duraflame logs or wood (they also smell a lot better than Duraflame logs).

We like the enormous almost-home-made "Very Vanilla Bean" marshmallows that you can find at Whole Foods.  Add some Dagoba chocolate and graham crackers and you've got a heck of a s'more. 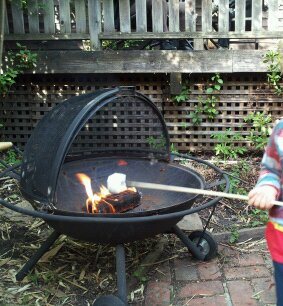 When renovating your bungalow, think about recycling as much as you can.  Your old sink, cabinet, furniture, etc., may find a new home with someone who would really appreciate it.  A few resources:

You may qualify for store credit so you can do your own shopping.

These places beat just leaving your old stuff out on the lawn or street, hoping that someone will get rid of them for you eventually.
Posted by Ms. W. at 8:00 AM No comments:

Email ThisBlogThis!Share to TwitterShare to FacebookShare to Pinterest
Labels: Recycling

On October 2, 2011, from 12:30-5:30pm, the Rockridge Community Planning Council is hosting the annual Rockridge Kitchen Tour.  On the day of the tour, tickets will be available for $40 at the Presbyterian Church on College Avenue in Oakland (5951 College Ave.).  This is a major fundraiser for the Rockridge Community Planning Council.  It is a great community event, and a fantastic opportunity to see some beautiful kitchens in a neighborhood full of Arts & Crafts influences.  There are nine homes on the tour this year.

We plan to post more about our experiences on the tour.  We're taking particular interest this year because of our plan to begin a kitchen remodel in the next few weeks.
Posted by Ms. W. at 9:55 PM No comments: