Oakland hires contractors to come out and fix sidewalk damage caused by "City trees" around the City.  Before the contractors come out, an inspector marks the sidewalks up and down the street with white spray paint.  The paint indicates where repairs are supposed to begin and end.

I came home one day to find the sidewalk in front of our house marked up with white spray paint.  I didn't realize what this was about until I walked up and down the street and saw paint wherever there were cracks in the sidewalk that were close to a tree.  It wasn't initially clear whether they were going to do the driveway, though the driveway was also marked up with spray paint.  I heard a rumor that they were going to require us to pay them to fix the driveway and that we would get a bill that we had to pay before they would start.

Turned out the rumor was false.  On one Friday, "no parking" signs popped up on the street in front of our house for the following week.  Something was about to happen and we hadn't gotten any bill or other notice in the mail at all (from the City or from anyone else).

I suspect the lack of notice (or any due process at all) would miff some folks.  But our sidewalk and driveway were a real mess and we were excited about the possibility that this would get fixed without having to go out and find a contractor.

That said, we remained concerned about the possibility for horror stories and inconvenience.  What would this be like?
Posted by Ms. W. at 7:13 AM No comments:

It turns out that tree roots were the problem with our driveway, and with the sidewalk up and down our street (including a substantial section in front of our house).

Here are a few pictures of the largest root that we eventually discovered under the driveway.  For scale purposes, the first picture shows my son playing with a truck that is about 8 inches long.  The diameter of the tree root under the driveway is roughly as long as the truck. 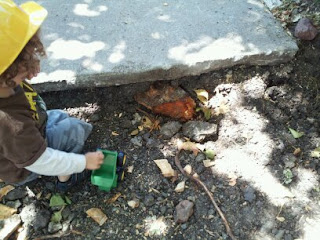 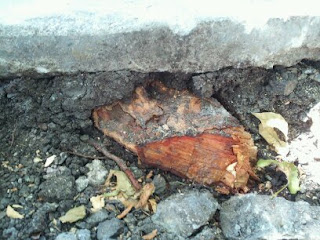 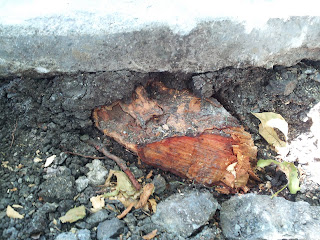 The good news here is that Oakland deals with damage caused by "City trees," and the large tree in front of our house is such a tree.

Over the past several years, our narrow driveway has been breaking down.  Whenever we parked our car in the driveway, we scraped the corner of the driveway, which is now much higher than the driveway.  I was not quite sure why this was happening.  Earthquakes?  Hill slippage?

Setting the question of why this is happening aside, we tried to figure out what to do.  Where do you find a contractor to deal with this?  How much should it cost?  How many estimates should we get?  Do we need a permit to fix the problem?  How much does that cost?

As the problem grew worse, so did our need to do something.  But I really lacked the time.

Believe it or not, help came from an unlikely source -- The City of Oakland!

Email ThisBlogThis!Share to TwitterShare to FacebookShare to Pinterest
Labels: Driveway

Very exciting new development -- The website OldBungalow.Com now belongs to us and points to our Blog!
Posted by Ms. W. at 6:43 PM No comments: