Finding a Sofa, Part I

Good Craftsman/Arts & Crafts style furniture is tough to come by.  Many pieces are considered antiques.  Many pieces actually ARE antiques.
This makes it tough for an amateur old bungalow owner to find something like a sofa, if you want to match the style of the house.
Stickley is THE name in American Craftsman style furniture.  http://www.stickley.com/  They have been around since 1900, and the style of their furniture is distinctive.
Unfortunately, at least based on their website they only really have one sofa model that has the sort of hand-crafted wood frame and comfy seat cushions that I’ve generally associated (in my amateur way) with Craftsman-style homes.  They call it the “Spindle Settle.”  http://www.stickley.com/OurProducts_Details.cfm?id=2797&q=sofa&view=all&view=complex&finish=&Collection=.
I’m just not big on this particular design.  Among other things, the rails on each of the arm rests are narrow, and don’t look quite right.
This is NOT a slam on Stickley.  They can do chairs, and all sorts of other things (as I’ll discuss in future posts).  I’m just not big on their sofas.
Fortunately, we found just the place to find the iconic Craftsman-style sofa (more on this tomorrow).  Though it wasn’t with the iconic Stickley…
Posted by Ms. W. at 7:48 PM No comments:

I confess that until around 2003, I never really knew that there was something called the "American Craftsman Style."  I also didn't know anything about the "Arts and Crafts Movement," which I always associated with summer camp and after-school activities.

I did know that I liked the unpretentious style of the houses found in south Berkeley and north Oakland, including the hand-made look of the lights and other detailing.

I'll be posting a lot about various Craftsman-style stuff over the next few weeks.  Before I do that, however, I want to say a bit about the Craftsman Attitude.  Some people take the American Craftsman style and/or the British Arts & Crafts Movement VERY SERIOUSLY.

I DO NOT take it that seriously.

Purists and historians may find fault in my characterization of Craftsman-related stuff.  For example, I recall a discussion with our realtor when we were looking for a house.  We had looked at a bungalow, and I said "I really love Craftsman houses like this."  Her response?  "That's a bungalow, not a CRAFTSMAN."

Ok.  That seemed very snooty and elitist (since we were priced out of the larger homes that she considered American Craftsman and/or Arts & Crafts homes).  But if you want to be a purist, who am I to stop you.  I got past the remark, we continued to use this realtor, and she did a great job helping us buy our bungalow.

On this blog, I'm not going to suddenly develop that sort of pretension.  If an attribute of a mere bungalow seems Craftsman-like to me, I'm going to say so, even if a historian and/or Craftsman hobbyist or enthusiast might disagree.  If I blog about furniture that seems like it is in the Craftsman style, I'm also going to say that, even if it wasn't made by Gustav Stickley himself.

I figure most folks will know what I'm talking about.  Craftsman enthusiasts are free to correct me in the comments.
Posted by Ms. W. at 5:51 PM No comments:

Email ThisBlogThis!Share to TwitterShare to FacebookShare to Pinterest
Labels: Craftsman

My grandfather was a plumber.  I therefore like to think that I have some facility for plumbing in my genes.

This fantasy seriously cracks my wife up.

At any rate, I feel like I'm at least generally capable of doing easy plumbing (like fixing clogged drains).  I understand how to shut off the water in a toilet BEFORE it overflows, unlike some friends (who shall remain nameless).  And I understand how to use a plunger.

I also think that in an old bungalow with a 2-year-old, a very narrow four-claw pickup tools is ESSENTIAL for your set of tools.

Our bathroom sink drains have small, easily-removable drain covers on them.  Removing the drain cover seems to speed up the drain rather dramatically at times.

Unfortunately, doing so makes it easy to drop spare change and toothpaste tube caps into the drain.

More in future posts about serious and not-so-easy plumbing in older bungalows.
Posted by Mike at 4:17 PM No comments:

Here's a picture of the fuse box in a cigar box. 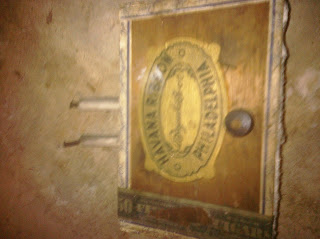 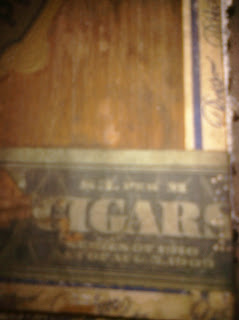 Here you can see the fuses inside the box: 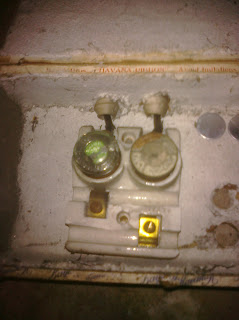 When we started this project, little did we know that further surprises were lurking in the (unfinished) basement.  Something was hiding there, in the dark.  It had been there for many, many years.

It was a fourth sub-panel.  And it had probably been there since 1920.
I hesitate to even call it a sub-panel.  I will have to post a picture of it in a future post.
While pulling wires, our electrician found a box.  A cigar box. An OLD cigar box.  Lined, of course, with asbestos.  Inside?  Two fuses.
This cigar fuse box led to an old electrical outlet in our front room.  We suspect that when the house was originally built in 1916, the front room had lights but lacked any outlets.  The original owners must have jury-rigged the cigar-box approach in order to add their first outlets.
Posted by Mike at 12:32 PM No comments:

We recently did a fair amount of electrical work on our bungalow.  Before we began, we had three separate electrical panels -- that we knew about:

I had never lived in a house with fuses before.  Nor did I really appreciate how cool a circuit breaker is.

That all changed after we moved into our bungalow and plugged in our washer, dryer, and a microwave.  All three were apparently on the same line.  And using any two of the three at the same time would consistently blow a fuse.

I began to appreciate why they lined the sub-panel with asbestos after seeing one of the fuses start glowing dark red, then bright red, and finally white hot before exploding.  This had no real entertainment value for me, except in hindsight.

I should add that finding fuses can be a challenge.  That's a problem when you go through them quickly (let's say by regularly forgetting that you should avoid turning on your microwave and dryer at the same time).  We're fortunate to live in an area where there are at least two hardware stores that carry them.  They are also available online.

In an upcoming post:  I reveal our discovery of the fourth "sub-panel."
Posted by Mike at 12:11 PM No comments: